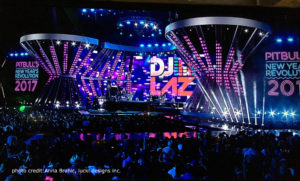 Major digiLED clients PBTV were in Miami to provide a range of our LED display screens for Pitbull’s New Year’s Revolution show celebrating the welcoming of 2017.

The design’s dynamism engaged both the Bayfront Park crowd as well as the broadcast audience around the country.

Anne Brahic, Production Designer for the show, said: “The new 5.9mm floor system was great. They come with their own legging system which allowed us to install them without headaches and they support the weight of people walking on them, which was essential too. They looked great in all our overhead shots. The LightSlice product was also a great discovery for me: the 2-pixel wide linear application was perfect for lining all the edges of our stage and runways. The way they clip on to brackets via a magnetic attachment point made the install super-efficient.”